(If the wiki becomes the collaboration of the month:)
Right now, this newsletter is probably only known by the users of the wiki (which is only about three people). I hope to expand this newsletter so that not only wiki users but also anyone around the internet can read this. This should also boost the popularity of the Chess Wiki and Wikia itself. But to reach this goal, we need your help. You can start by writing articles. Don't worry if you think it won't make the final cut, that is for the main editors of the newsletter (Pieguy48, Liliput, and Ember Nickel) to decide. If you find that you can't think of anything to write, then please visit the rest of our humble wiki at chess.wikia.com. The wiki itself could use great amounts of help. Also, congratulations Viswanthan Anand, the NEW World Chess Champion.

Thank you,
The WCJ editors:
Pieguy48, Newsletter Manager
Liliput, WikiChess admin
Ember Nickel, Wiki editor Okay, that really stunk. But it gets the main idea across. Feel free to make that better (or if it's REALLY bad, just rewrite the entire thing). 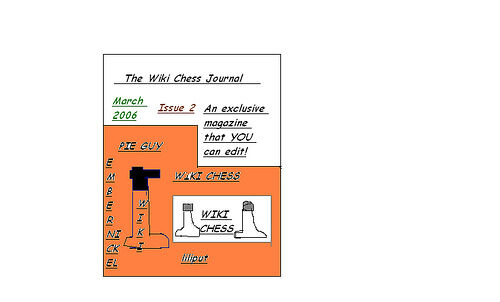 “The Pin is mightier than the sword” -- Fred Reinfeld

If anyone knows how to make the two images of pawns non-clickable (if you click it, it won't take you to the image page), please do so.

Sorry about the cover, it isn't that great. If you have any ideas, put it here. I can still improve it.

This is now the June issue. The problem is, I can't think of anything to write, and there only seems to be about two or three people contributing to the wiki. We really need to bring in some more people. I've posted the wiki link everywhere I could, but no one seems to come.

In other news, I just now noticed that the cover says March when it should have said May. I'll redo it to say June now (and imporve the pawns [I have a real image-editing program I can use]) if no one has a problem with that.

Are we going to keep working on this, or work on another issue? Liliput

The WikiChess Journal (WCJ) is a monthly newsletter, owned by Pieguy48. It is made exclusively for WikiChess, an online chess encyclopedia that anyone can edit.

Welcome to our second issue of WCJ, the newsletter that anyone can help with. Today's issue will cover the topics of .... We hope you enjoy this month's issue.

Pandolfini's Chess Complete, written by Bruce Pandolfini, presents a unique style of writing about chess. The body of the book is entirely written in question-and-answer format, starting with the basics and then moving into strategy. Pandolfini's style is casual and humorous, but it does not detract from the quality of the information. The final chapter, which includes many short descriptions of high-rated players, drags and could probably have been deleted. Still, a fun while useful read.

Chess for the Famous[]

When we think of chess, we often think of great grandmasters such as Bobby Fischer or Garry Kasparov. But we most definitely do not think of the pop culture icons of today: John Wayne and H.G. Wells, among others.

This month, WCJ presents to you a list of modern or popular famous people who have played chess. How many did you know about?

Petroff's defence (or defense) is a possible derivative of the king's pawn opening.

(See article on algebraic notation for information about recording moves.)

Article retrieved from the WikiChess article by Ember Nickel and Pieguy48.

Bobby Fischer is a famous chess champion. He was the first American to win the FIDE World Chess Championship.

Fischer was born on March 9, 1943 in Chicago, Illinois, to Regina Wender (an American Jewish citizen) and (as written on his birth certificate) Hans-Gerhardt Fischer, who was a German biophysicist. However, after FBI research, it was believed that Fischer's true father was actually a Hungarian man named Paul Felix Nemenyi, who had fled the country after Hitler's rise to power and worked on the Manhattan Project.

Fischer's parents divorced, and he lived with his mother in Arizona, until they moved to New York a little while later.

Fischer's first exposure to chess came when he was only six years old. His sister, Joan, had bought a chess set from a candy store. From then on, Fischer was hooked. When he was thirteen, his mother introduced him to a chess teacher, John W. Collins.

Starting from 1956, Fischer began to gain titles. His first important one was the U.S. Junior Chess Championship. In that same year, he played Donald Byrne in a game that is today known as "The Game of the Century." A year later, Fischer won the U.S. Open Chess Championship, and yet another year later, became the U.S. champion, today holding the record of youngest champion. He then played in the Interzonals, where he became an International Grandmaster. He was the youngest grandmaster in history (until Judit Polgár broke the record).

The next year, Fischer participated in the Candidates Tournament, Fischer made a deal with the Soviet chess team. When Fischer played a Soviet player, they would make a draw, therefore allowing them to fully concentrate in their matches against non-Soviet teams. Fischer lost the tournament to Mikhail Tal in the end, who later became World Champion.

From the article Bobby Fischer from WikiChess.

InstantChess.com InstantChess.com is an online chess website. It is popular for chess players of all ages and skill levels due to its user-friendly play, non-hardcore membership, and its many features (some usable only by members). It is headquartered in Moscow, the capital of Russia (which is known for producing many chess masters), and has an international membership. Even if they are not members, people from all over the world can play chess against each other and chat at the same time. The website also features a club forum where members can discuss a wide range of topics. It also has several other unique options such as customized games, custom opponent search preferences, and searches by a player's User Name, though most are for members.

InstantChess.com provides many options during a game, such as the "takeback last move" option (which must be asked for and accepted by opponent), and extensions on the timer, which varies from 1 to thirty minutes. The website also features a search engine that analyzes the chances of victory for White and Black at any given move, and shows how many other games (on that website) ended in the same position. During play, the moves are recorded in algebraic notation and players can keep track of which pieces they currently have. During and after the games, players can propose to their opponents such things as "Play another game?" or "Let's draw?" For non-members, these options are available, too (though their chat is limited to selected phrases).

Retrieved from the WikiChess article by DiZ.

Is this legible? I can get another one if needed.

Thank you for reading this issue of WCM, and please come back next month for a new issue.

If you had any problems with this newsletter, please tell us. If you want these issues to be better, then please feel free to improve them.

This month's editors are:

Thanks to those who have helped.