The queen is the most powerful, and one of the most useful chess pieces. It can move diagonally or orthogonally in any direction, combining the powers of the rook and bishop. With a correctly placed board, the white queen begins on the square d1 and the black queen on d8. An easy way for beginners to remember this, the Queen always starts on her own color (or, the queen is picky). The white Queen on a white square, and black on black. It is worth 900 centipawns of material and is usually represented by a Q in English algebraic notation.

Many novice players will want to bring out their queens early on in the game; while this strategy can be effective against other beginners, experienced players know how to make use of their queen better. Due to its long range and flexibility in movement, the queen is a great piece to execute forks with, though this is usually only useful if both threatened pieces are undefended or one is a king (in check) and the other is undefended. A queen is at her most power when the board is open, and the opponent's king and other pieces are undefended. Because a queen is so powerful, it is not a good idea to trade it for an opponent's piece, unless it is a queen, or doing so guarantees a checkmate.

While the queen is an excellent attacking piece, it is also a good defensive piece, being able to support other minor pieces early on in the game.

The maximum moves a queen can ever have is 27, as shown in the above picture.

The queen is worth 9 (nine) points.

Through the years the Queen has swapped gender! Originally (s)he was a Farzin, a wise man who counseled the King. When Chess came to Europe he was known as a "fers". However the Farzin/fers could only move one square in a diagonal. During medieval Europe it was accepted that the person next to a King should be a Queen, therefor allowing the Farzin to switch gender! Only two sets of chessmen from that time are left - the Lewis chessmen in the British Museum, and a group of figural chessmen kept at the Bibliotheque Nationale in Paris; both show a Queen seated on a throne. So, the switch of gender happened, even though the name "fers" stayed for the next few hundred years. Even so, Her Majesty had to wait until the Renassance until she could gain her ultimate board-wise power. Rule changes accursed when Spain tried experiments to try and speed up a game of Chess. One change increased the Queen's power so that she could move in any direction the length of the board. This gave the lady true power behind the throne, and was christened by Italians Mad Queen Chess. 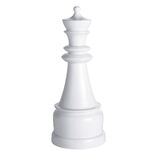 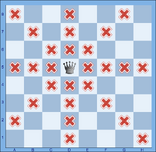 The queen can move to 27 squares if placed in the middle of the board, occupying ~ 42% of all squares. 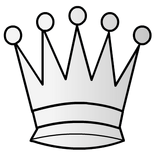 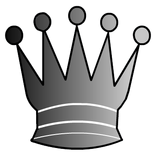 Black Queen symbol.
Add a photo to this gallery
Retrieved from "https://chess.fandom.com/wiki/Queen?oldid=5009"
Community content is available under CC-BY-SA unless otherwise noted.