Welcome to WikiChess
The Wiki about Chess!

Chess is a strategy game played by two people. Millions of people around the world know and play chess. Chess today is a recognized sport of the International Olympic Committee and of course it's our favorite game. The intellectual aspect of chess diverts many strategists and mathematicians to the game.

WikiChess was started on January 10, 2006, and is a definitive communal resource dedicated to providing information about Chess and its variants. Since this is a wiki, it can easily be edited by anybody. Please use discretion while editing; only add helpful, relevant information, and don't remove any information from our great collection. Although you do not have to be registered in order to edit, it's recommended you do, so you can receive recognition for your work. To create an account, register with Fandom, or just register here if you are not already registered on any Fandom site.

Chess is a great game. All the pieces you can read about on this wiki are: Pawn, Rook, Bishop, Knight, King, Queen, Chancellor, Archbishop. (You can search up the pieces in the search bar). Guides on special moves and tactics are also available. The wiki (may or may not) have all the most latest information about upcoming grandmasters. Please consider contributing to the cause by editing an article (preferably while registered to an account).

GM Magnus Carlsen might be letting go of his world title in classical chess unless GM Alireza Firouzja will be his opponent for the next match. "If someone other than Firouzja wins the Candidates Tournament, it is unlikely that I will play the next world championship match," the world champion said in a podcast on Tuesday.

The Candidates Tournament is scheduled for June 2022, and the next world championship is tentatively planned for early 2023. The reigning champion might not be part of it.[1]

The rook can move either up and down or side to side; it is very commonly used to give checkmate on the back rank.

Some say, "Ten moves, 8 pieces". If you have moved 8 of your pieces(not pawns) only once by the tenth move then you should be well on your way to getting the rooks into play.

This task requires the development of the bishops: after which everything else can escape the backline.

Magnus Carlsen is a Norwegian grandmaster (born 1990) and the current world chess champion. He has a rating of 2855, ranking him as first in the world. In May 2014, he had the highest rating in the history of chess with a rating of 2882.

Carlsen became a grandmaster at the tender age of thirteen years, four months, and twenty-seven days, the eighth youngest grandmaster age in history. 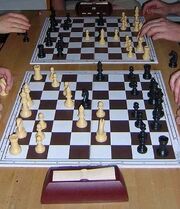 Bughouse is a type of team chess that is played with four players and two boards. The two boards are set up as a usual chess board would be. The four players split up into two teams. One team member plays as white, while his teammate plays as black.

Normal chess rules apply to Bughouse, with some exceptions. The object of Bughouse is to actually take the king. Therefore, "check" is not called. If the player does not see if he is in check and moves another piece, his king will be taken, and the game ends. When a player takes a piece, that piece goes to his teammate. The teammate can use this piece at any time during his turn. He can place it anywhere on the board (However, pawns cannot be placed on the first or eighth rank). After one places a piece, one's turn is over.

Want to join our Discord server for discussing about Chess and the wiki? Here's the invite: https://discord.gg/S72BTuG