Edit
watch 01:36
We're Getting Mutants in the MCU - The Loop
Do you like this video?
Play Sound

The king (Known as General in Xiangqi, originally 將 and also 王將 in Shogi) is the most important piece in the game, even more important than the powerful queen despite its ironically weak moves compared to its importance, If a king is checked and cannot move out of check, it is checkmate, and the game is lost. Kings can move one space in any direction, as long as it is not moving into check. They can also perform castle with a rook in International Chess. The white king is set up on e1, and the black king is set up on e8. Once a king is in checkmate, the game is over. Kings are represented in English algebraic notation by a capital K. In Xiangqi, it can’t move out of the palace and only able to move vertically and horizontally.

Where a king is able to move

Although Kings cannot be "captured", the estimated value for a King is 3.5, which is slightly stronger than a Knight or a Bishop, and slightly weaker than a Rook.

Using the king to capture pawns in the endgame

King's value point is infinity, due to his importance. However, especially in the endgame, the king can also be a fighting piece, and is sometimes given a fighting value of 3.5 points.

The strategy relating to a king seems to be focused more on defending the king than employing its powers. If the king is in check, there are three ways to escape: 1.) most favorably, capture the threatening piece; 2.) move the king out of check; or 3.) put a piece between the threat and the king (Blocking).

A king's offensive options become more important during the endgame, where it is generally favorable to move the king out to the middle of the board where it can move out to take surrounding pieces, usually pawns that it will eliminate one by one.

If the kings are the only pieces on the board at one time, it is automatically declared a stalemate. A player who knows they are seriously losing may attempt to bring about stalemate in order to avoid defeat, particularly during the endgame. 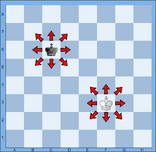 The Kings can move one square in any direction. 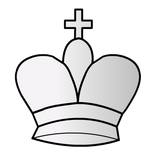 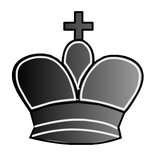 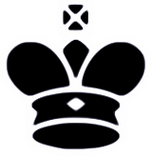