Judkins Shogi (ジャドケンス将棋 Jadokensu Shōgi "Judkins Chess") is a modern variant of Shogi (Japanese Chess), however it is not Japanese. Credit for its invention has been given to Paul Judkins of Norwich, UK, prior to April 1998. 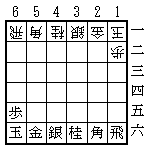 Rules of the Game Edit

The objective of the game is to capture your opponent's King.

Two players, Black and White (or 先手 sente and 後手 gote), play on a board ruled into a grid of 6 ranks (rows) by 6 files (columns). The squares are undifferentiated by marking or color.

Each player has a set of 7 wedge-shaped pieces, of slightly different sizes. From largest to smallest (most to least powerful) they are:

Most of the English-language names are chosen to correspond to rough equivalents in Western Chess, rather than as translations of the Japanese names.

Each piece has its name in the form of two kanji written on its face. On the reverse side of some pieces are one or two other characters, often in a different color (commonly red instead of black); this reverse side is turned up to indicate that the piece has been promoted during play. The pieces of the two sides do not differ in color, but instead each piece is shaped like a wedge, and faces forward, toward the opposing side. This shows who controls the piece during play.

Listed here are the pieces of the game with their Japanese representation:

English speakers sometimes refer to promoted Bishops as Horses and promoted Rooks as Dragons, after their Japanese names, and generally use the Japanese name Tokin for promoted Pawns. Silver Generals and Gold Generals are commonly referred to simply as Silvers and Golds.

Each side places his pieces in the positions shown below, pointing toward the opponent.

The players alternate making a move, with Black moving first. (The traditional terms 'black' and 'white' are used to differentiate the sides during discussion of the game, but are not literally descriptive.) A move consists of moving a single piece on the board and potentially promoting that piece, displacing (capturing) an opposing piece or dropping a captured piece onto an empty square of the board. Each of these options is detailed below.

The movement categories are:

Some pieces move only one square at a time. (If a friendly piece occupies an adjacent square, the moving piece may not move in that direction; if an opposing piece is there, it may be displaced and captured.)

The step movers are the King, Gold General, Silver General and Pawn.

The Knight can jump, that is, it can pass over any intervening piece, whether friend or foe, with no effect on either.

The Bishop and Rook can move any number of empty squares along a straight line, limited only by the edge of the board. If an opposing piece intervenes, it may be captured by moving to that square and removing it from the board. A ranging piece must stop where it captures, and cannot bypass a piece that is in its way. If a friendly piece intervenes, the moving piece is limited to a distance that stops short of the intervening piece; if the friendly piece is adjacent, it cannot move in that direction at all.

A player's promotion zone consists of the two farthest ranks, at the original line of the opponent's Pawn and beyond (that is, the opponent's territory at setup). If a piece crosses the board within the promotion zone, including moves into, out of, or wholly within the zone, but not including drops (see below), then that player may choose to promote the piece at the end of the turn. Promotion is effected by turning the piece over after it moves, revealing the name of its promoted rank.

Promoting a piece has the effect of changing how that piece moves until it is removed from the board. Each piece promotes as follows:

Following are diagrams that indicate the movement of each piece. Pieces are pared with their promotion and those with a grey heading start out in the game; promoted pieces have a blue heading.

Captured pieces are truly captured in Judkins Shogi. They are retained "in hand", and can be brought back into play under the capturing player's control. On any turn, instead of moving a piece across the board, a player can take a piece he has previously captured and place it on any empty square, facing the opponent. The piece is now part of the forces controlled by that player. This is termed dropping the piece, or just a drop.

A drop cannot capture a piece; that requires an additional move.

Pieces that are dropped in the promotion zone do not promote as a result: Promotion requires that piece make a normal movement on a subsequent turn, as detailed under "Promotion", above. Pieces that are promoted when captured lose that promotion; they are unpromoted when dropped back on the board.

There are two restrictions when dropping Pawns:

A Pawn cannot be dropped into the same file (vertical column) as another unpromoted Pawn controlled by the same player. (A Tokin, or promoted Pawn, does not count as a Pawn when considering this drop restriction.)

When a player makes a move, such that the opponent's King could be captured on the following move, the move is said to give check to the King; the King is said to be in check. If a player's King is in check and no legal move by that player will get it out of check, the checking move is also mate, and effectively wins the game.

A player is not allowed to give perpetual check.

A player who captures the opponent's King wins the game. In practice this rarely happens, as a player will resign when checkmated, as otherwise when loss is inevitable.

A player who makes an illegal move loses immediately. (This rule may be relaxed in casual games.)

There are two other possible (but fairly uncommon) ways for a game to end: repetition (千日手 sennichite) and impasse (持将棋 jishōgi). If the same position occurs four times with the same player to play, then the game is no contest. Recall, however, the prohibition against perpetual check. For two positions to be considered the same, the pieces in hand must be the same, as well as the position on the board.

The game reaches an impasse if both kings have advanced into their respective promotion zones and neither player can hope to mate the other or to gain any further material. If this happens then the winner is decided as follows: each Rook or Bishop scores 5 points for the owning player, and all other pieces (except Kings) score 1 point each. Promotions are ignored for the purposes of scoring. A player scoring less than 12 points loses. If both players have at least 12 points, then the game is no contest.

Games which are no contest are usually counted as draws in amateur tournaments, but in professional style tournaments the rules may require the game to be replayed with colors reversed (possibly with reduced time limits).

Games between players of disparate strength are often played with handicaps. In a handicap game, one or more of White's pieces is removed before the start of play, and White plays the first move of the game. Note that the pieces removed at the beginning play no further part in the game - they are not available for drops. The imbalance created by this method of handicapping is not as strong as it is in chess, because material advantage is not as powerful in Judkins Shogi as in Chess.

Common handicaps, in increasing order of size, are as follows:

Other handicaps are also occasionally used. The relationship between handicaps and differences in rank is not universally agreed upon; several different systems are in use.

The method used in English-language texts to express Shogi moves was established by George Hodges in 1976. It is derived from the algebraic notation used for Chess, but differs in several respects. Minor variations are made for Judkins Shogi.

A typical example is P-6d. The first letter represents the piece moved: P = Pawn, N = Knight, S = Silver, G = Gold, B = Bishop, R = Rook, K = King. Promoted pieces have a + added in front of the letter. e.g., +P for a Tokin (promoted Pawn). The designation of the piece is followed by a symbol indicating the type of move: - for an ordinary move, x for a capture, or * for a drop. Next is the designation for the square on which the piece lands. This consists of a number representing the file and a lowercase letter representing the rank, with 1a being the top right corner (as seen from Black's point of view) and 6f being the bottom left corner. (This method of designating squares is based on Japanese convention, which, however, uses Japanese numerals instead of letters. For example, the square 2c is denoted by 2三 in Japanese.)

If a move entitles the player to promote the piece, then a + is added to the end to signify that the promotion was taken, or an = to indicate that it was declined. For example, Nx5c= indicates a Knight capturing on 5c without promoting.

In cases where the above notation would be ambiguous, the designation of the start square is added after the designation for the piece in order to make clear which piece is meant. For example, if Black has two Golds (one was captured and dropped) which can be moved to the square 5e in front of the King, and these are distinguished as C6e-5d (moving the left one) and C4e-5d (moving the right one).

Moves are commonly numbered as in Chess. For example, the start of a game might look like this:

In handicap games White plays first, so Black's move 1 is replaced by an ellipsis.

Retrieved from "https://chess.fandom.com/wiki/Judkins_Shogi?oldid=3125"
Community content is available under CC-BY-SA unless otherwise noted.