Castling is a chess term used to describe a move done by the king and the rook.

To castle, the king is moved two spaces towards a rook. The rook is then placed on the space next to the king, on the opposite side, as if jumping over the king.

Castling can only occur when the following conditions are met:

Note that the rook can castle while under attack.

The algebraic term for castling kingside is 0-0, while queenside is 0-0-0. Castling is considered to be a king move.

Castling can determine future weaknesses and attacks. For example, on the right, white should not create a kingside Pawn Storm because it will severely weaken the king.

Hand castling is the act of manually moving the king and rook into the castle position. Typically, a player would hand castle when they have already moved their king or rook and are unable to castle. 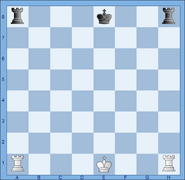 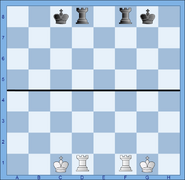 After queenside and kingside castling. 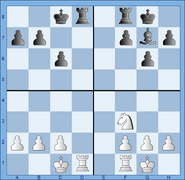